I took a train to office, collected a P2 Card and left for 3 different locations for shoot. Between lighting and waiting, my mind was preoccupied with thoughts of Pappa. My mind was playing re runs of "this day - three years back"...I couldn't help myself from being sad, so I started typing on my phone.

Today is the saddest day of my life. Three years back I lost a parent and learnt the meaning of a new emotion. An emotion I mistakenly associated only with my trivial break-ups (with my then boyfriend and now husband),  and fights with siblings. Something that fooled me for 29 years to teach me its true meaning ruthlessly - Grief.

Three years...of not seeing Pappa and not hearing his voice.
How unimaginable this seemed on 10th of September three years back, when the news was first broken to me. Over these days and months and years, I have come to realize that, self healing is a wonderful thing. I can't say I've completely reconciled to Pappa's absence but for now its in the little things in my life where I find Pappa.

Chiggu bhai, tired from work, but nonetheless,  excitedly serving mithai to mummy, feeding us all from the same katori- just like pappa used to. Chiggu Bhai's face, but Pappa's voice in my head...

In the lyrics of a song that I listen to everyday on the train to Lower Parel... "Kal kya pata, kin ke liye aakhein taras jaaengi..."
Every IPL season, because I have wonderful memories of enjoying the first season with him. During the second season, Pappa had complained "iss baar aap hamaare saat matches nahin dekhti hain..."
Every time I fall ill and go for a medical test... Because on hearing about my bad health, Pappa's reply was always the same. "aap ghar aajaeye, hum aapke saare test karwa denge." Said with deep concern in his voice "
When some big political developments take place in the country, because on my trips home, Pappa and I would talk about politics a lot.. We would watch news after news and some random Chinese kung fu films dubbed in Hindi between ad breaks.
The opening sting music of BBC news, because he heard it so loud and Mummy hated it..
When ever I say I'm tired, I remember one of my last conversations with him, when he told me the house renovation tires him a lot.The fatigue that eventually took him away from us.

But Inshallah Pappa is at rest now. He's closer to Allah and always in my prayer. We'll meet someday again, till then he  lives in my memory always in a white kurta pajama...smiling radiantly.

Popular posts from this blog

(An Article written by our mother, Meera) 3yr old It was a happy day when I had my second baby boy.  Everything was so beautiful and new.  But, on the third day my baby fell ill with a stomach infection and started having motions. By the fifth day he was totally dehydrated.  Then began the rush with high dose medicines. A cut was opened in his vein and drips were administered. We were all praying.  Seeing my three day old braced with medical paraphernalia made me anxious and nervous. God heard our fervent prayers, Rizwan recuperated.  All seemed to go well till he was 7-8 months, but then we realized that he still could not balance his head.  From there commenced a saga of many trips to doctors and hospitals.  My June (Rizwan) was diagnosed with cerebral palsy. This came as a shock.  Honestly, we had never heard of it before.  After recovering from the initial shock began the reality of everyday life.  June was special, so every thing in our life became different.
Read more 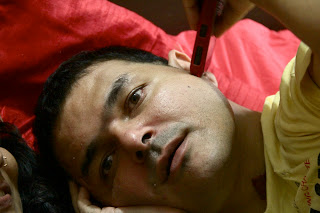 I finally got Juney on the phone. I spoke for 5 mins and he heard me babble for that much time. It's quite a big task to get him on the phone. Actually, that's the easy part; he likes mobile phones, but only for listening to music. To get him to actually listen to you talk, is the bigger challenge! I applied a different strategy today, speaking to him like a grown up. I told him I'll be coming to Lucknow next month to take him back. And that I miss him because no one makes tea for me anymore. QED! Phone to his Ear , not without style though!
Read more